No, this isn’t an origami hummingbird. This is a hummingbud.

This photo of an unusual looking plant posted by redditor Octopus Prime has caught the Internet on fire, with people wondering where the plant came from and what benefit it received from looking like a bird. Thanks to fellow redditor SolitaryBee – a post-doc scientist studying flower evolution – we now have an answer.

The plant in question is known as the green flowerbird or regal flowerbird (Crotalaria cunninghamii), and is a member of the legume family that includes chickpeas and alfalfa. The perennial shrub is native to inland northern Australia, where it thrives along sandy dunes. Interestingly, no hummingbirds live in Australia.

Many commenters associated the flowers’ shape with an adaptive evolutionary development. But, as SolitaryBee helpfully pointed out, this couldn’t possibly be the case. “The fact that the flower looks like a bird to humans cannot have evolved adaptively because as a signal receiver, there is nothing humans could have done to increase the fitness of individuals that evolved this signal (to look like a bird),” the scientist commented. “Unless indigenous Australians in arid Australia bred or traded the plant because it looks like a bird.”

In fact, it’s highly unlikely that any non-human would mistake the flowers for birds. What humans experience when looking at the photo is something called simulacrum, whereby our eyes are tricking us into seeing a representation of an object that isn’t actually present. 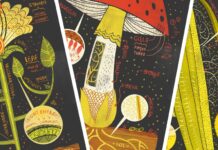 Anatomy of a Mushroom, a Flower and a Cactus