Old Lady Feeds Squirrels With Marionette of Herself

This photo taken by Nathalie Kalbach shows an 85-year old woman as she is feeding a squirrel with her own marionette version in New York City’s Washington Square Park. Amazing, isn’t it? And the story behind it is equally amazing. 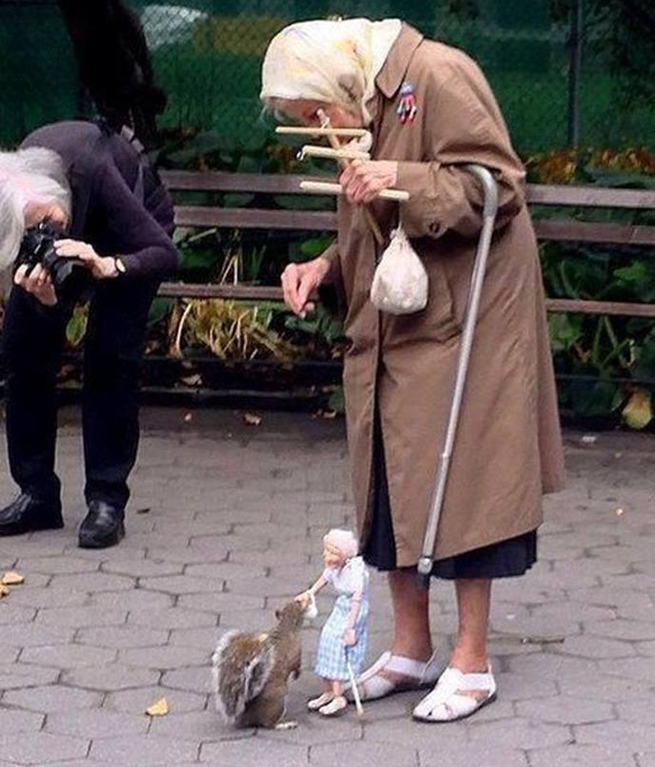 It all started with when Ricky Syers, a talented street performer, met Doris Diether, a housing rights activist who had lost her voice. According to an article by Nina Golgowski for the New York Daily News, the two became instant friends:

It was while his marionettes were performing in the park on July 30 that Diether, who temporarily lost her voice a year ago due to an injury, first approached him. “One day she comes up to me and whispers, ‘I have something for you,’” he recalled. Opening a scrap book she revealed old newspaper clippings and articles she had written on marionettes back in 1974. Articles more recently added to her collection were ones she had seen on Syers’ work, which she cut out and saved for him. The gesture floored him. “This marionette thing has bonded us,” he said of their common interest, which inspired him to create the marionette resembling her “in honor of her.” …The charming little puppet featuring Diether’s short, white hair and rosy cheeks comes complete with a handbag, cane, and floral blouse and skirt.

Here’s a longer video about their friendship: