Lunar Animals and Other Objects (or The Great Moon Hoax)

Here’s a story of how lunar animals and objects might appear in the wake of astronomers. 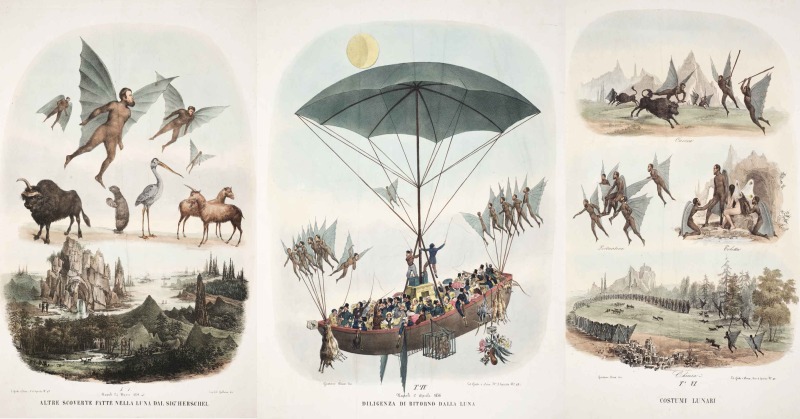 Astronomers in the 1800s were busy mapping the sky and exploring the known boundaries of the universe, assisted by advances in telescopes and the invention of photography. The outermost planets of the solar system new star clusters were found, reigniting an age-old question: Could life exist on other worlds? Then, the “plurality of worlds” theory, a hot topic of debate, and the emerging genre of science fiction took it even further…

Sometimes people’s imaginations allowed fantasy to encroach on fact. In 1834, British astronomer John Herschel started observing the heavens from South Africa. He employed a 20-foot reflecting telescope with an 20-inch lens, the largest working telescope of its time.

In 1835, Richard Adams Locke, a writer for the New York newspaper The Sun, concocted a series of fictional scientific reports claiming that Herschel had discovered “man-bats” on the moon and had named them Vespertilio homo. The story took on a life of its own and was repeated across continents, making The Sun the best-known newspaper in the world. Fantastical images were printed to meet the demand of a public who believed the satire to be true. The story was so popular that The Sun’s owner would not allow Locke to expose the truth, and the incident is now known as the Great Moon Hoax.

Adding to the intrigue, Edgar Allan Poe wrote a moon hoax of his own, publishing his tale of moon-traveling Hans Pfaall shortly before Locke’s articles appeared in The Sun. Poe accused Locke of stealing his idea and attempted to expose him as a fraud.

The depiction of the Moon Hoax by Leopoldo Galluzzo below is a mash-up of the original news articles, Poe’s moon hoax, and various retellings of the story in other newspapers of the time. It is likely that the inclusion of the balloon powered flying machine is from Poe’s moon hoax in which Hans Pfaall travels to the moon by balloon. The passengers on the flying machine are likely missionaries and scientists sent to study the man-bats and teach them about the bible. After the Sun story appeared, a proposal appeared in other New York City papers to send a ship to the Moon to bring the lunarians bibles as well as to study them. 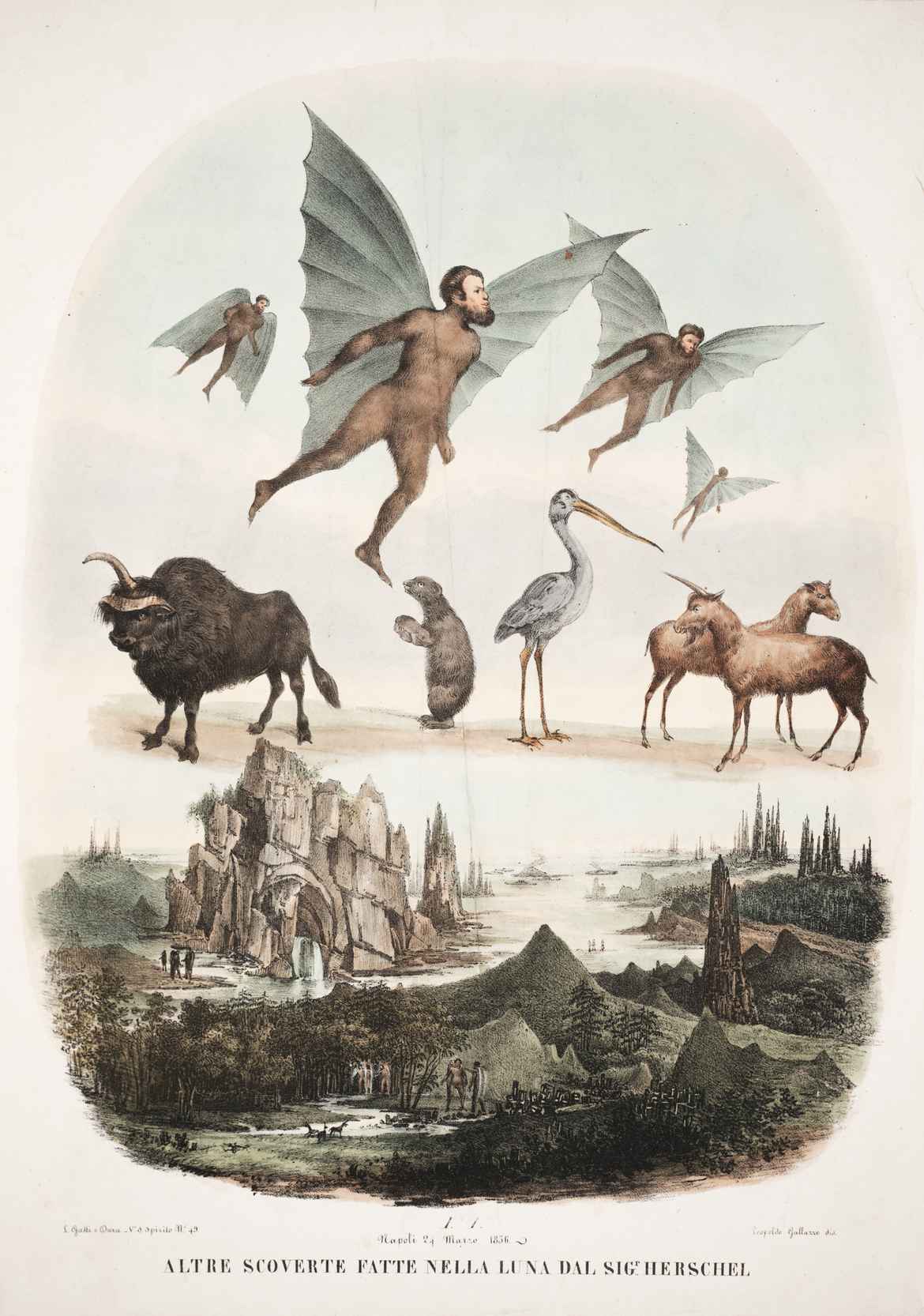 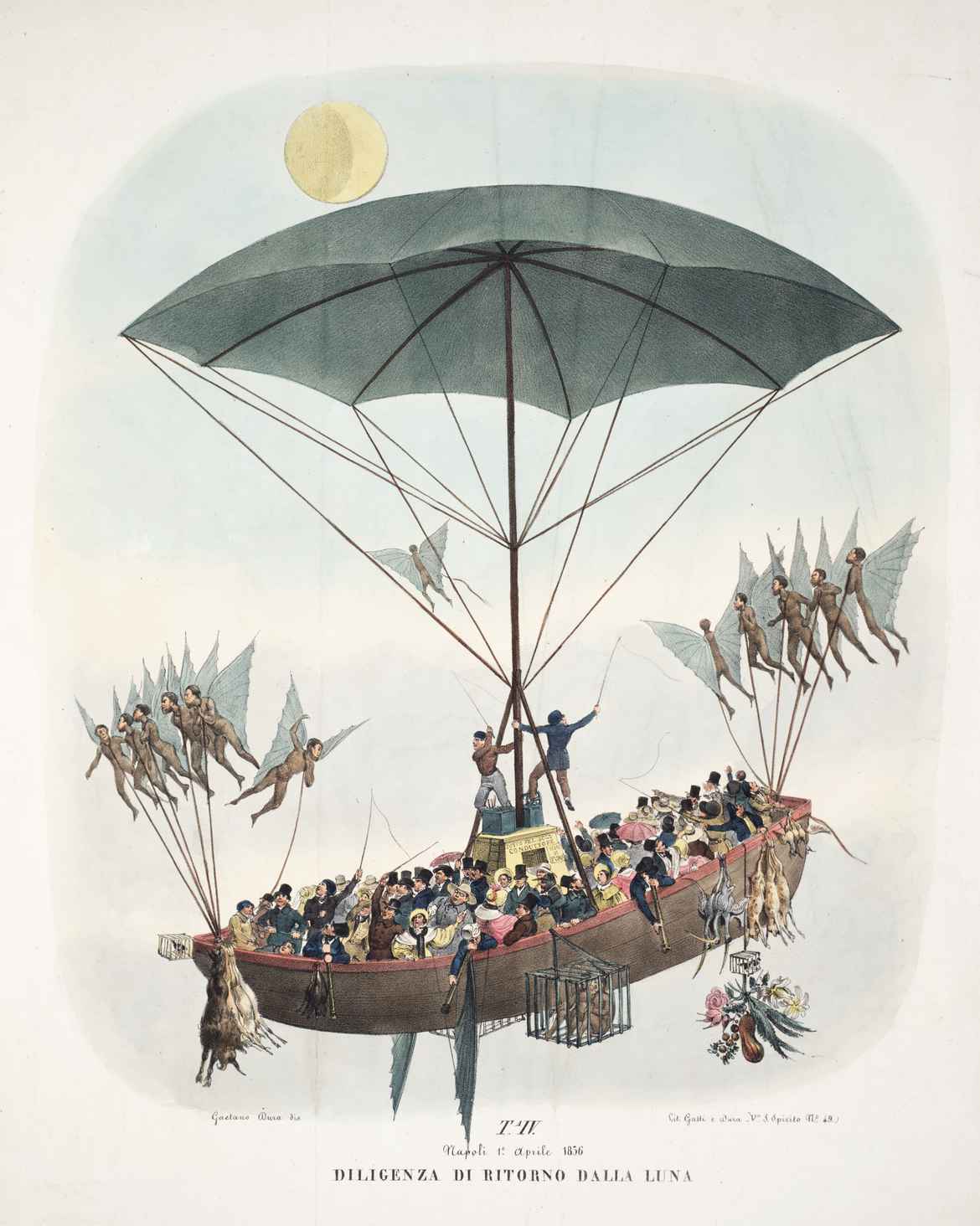 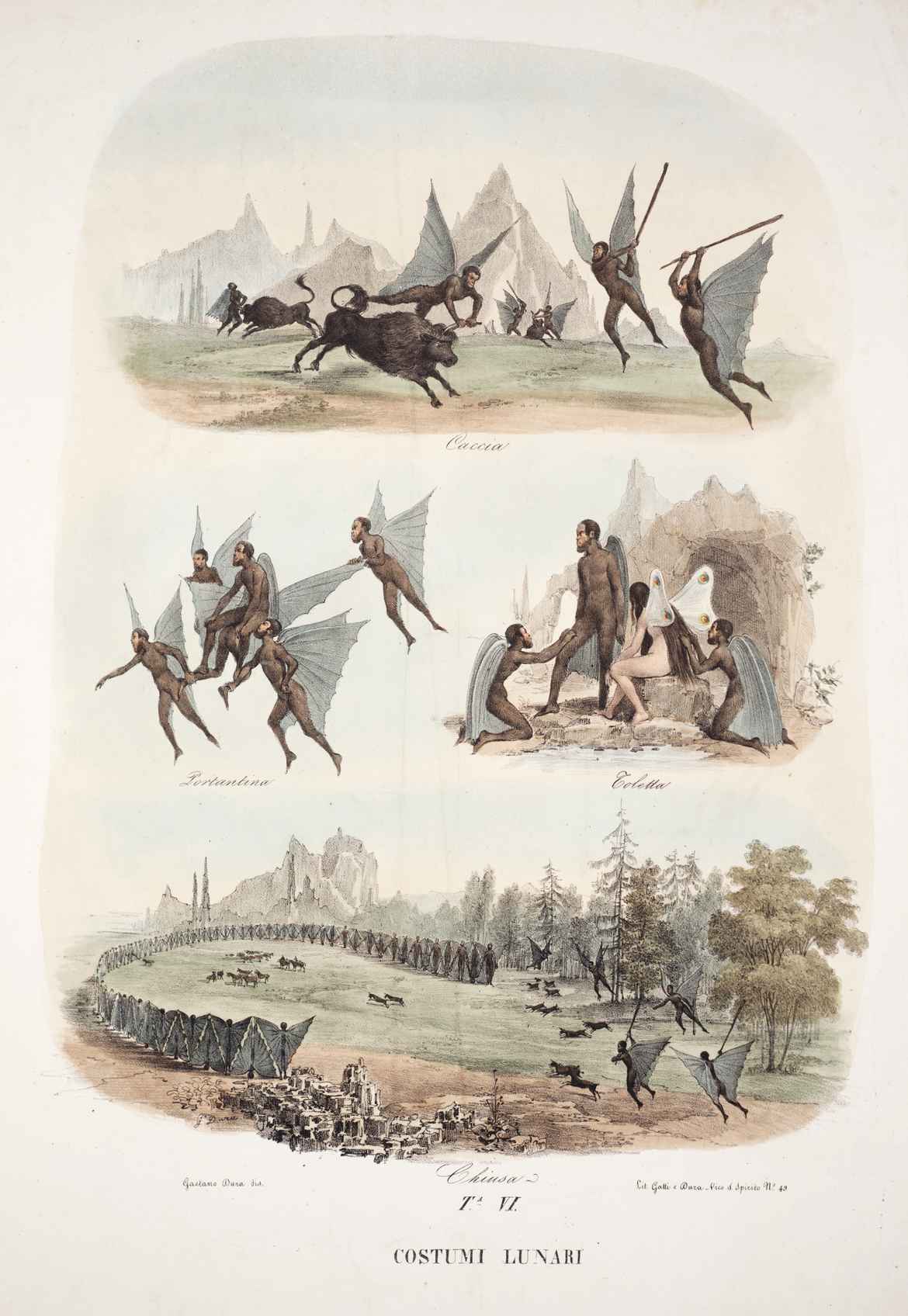 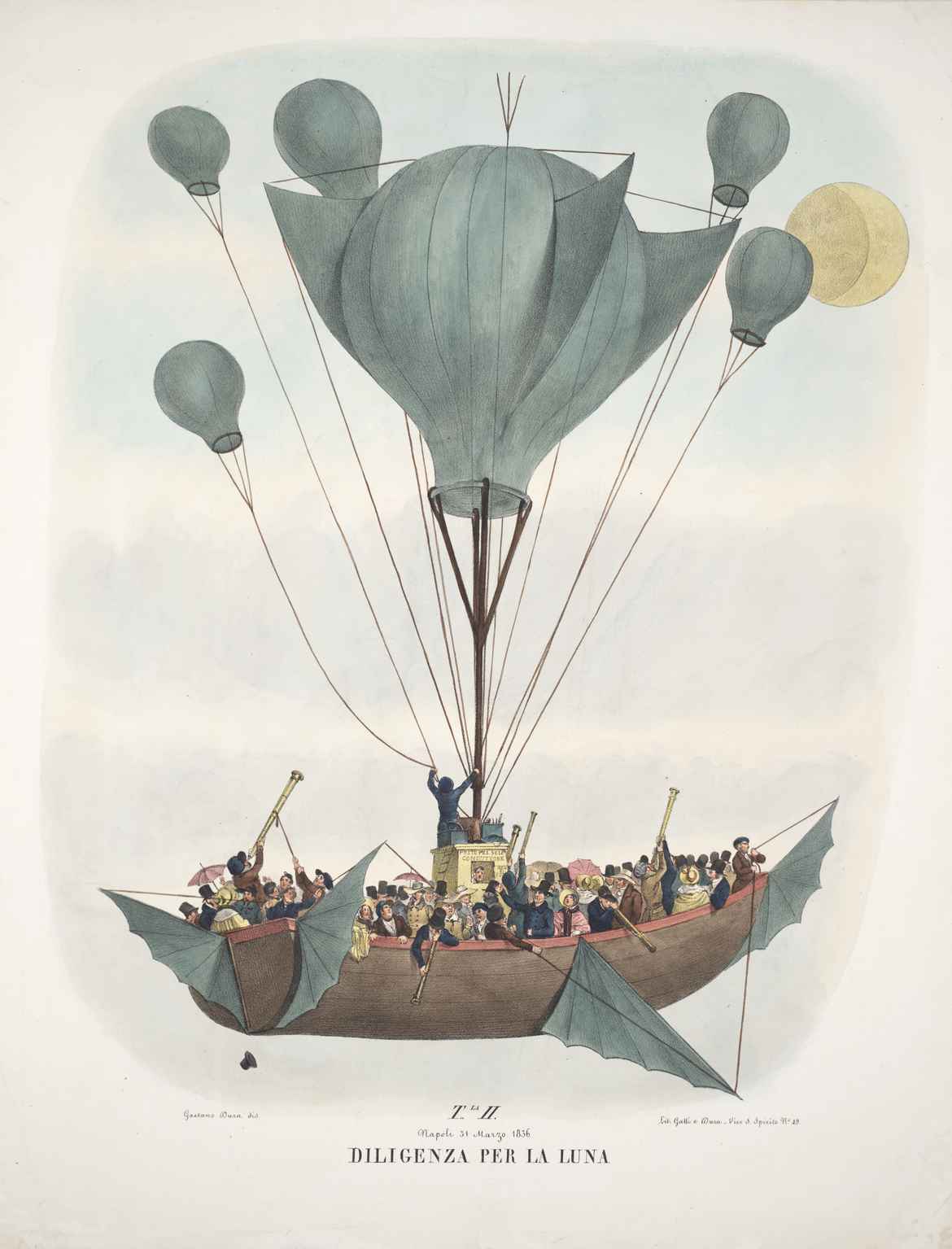 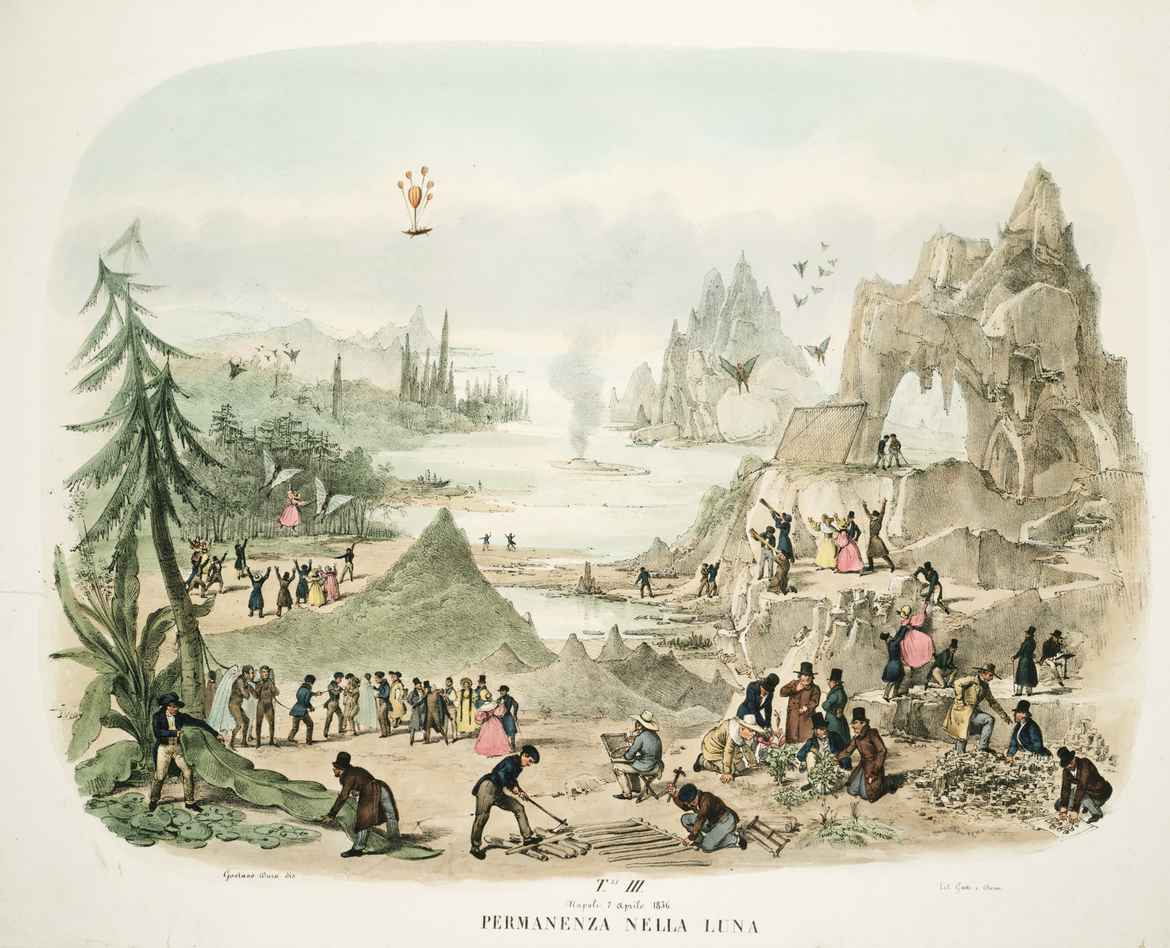 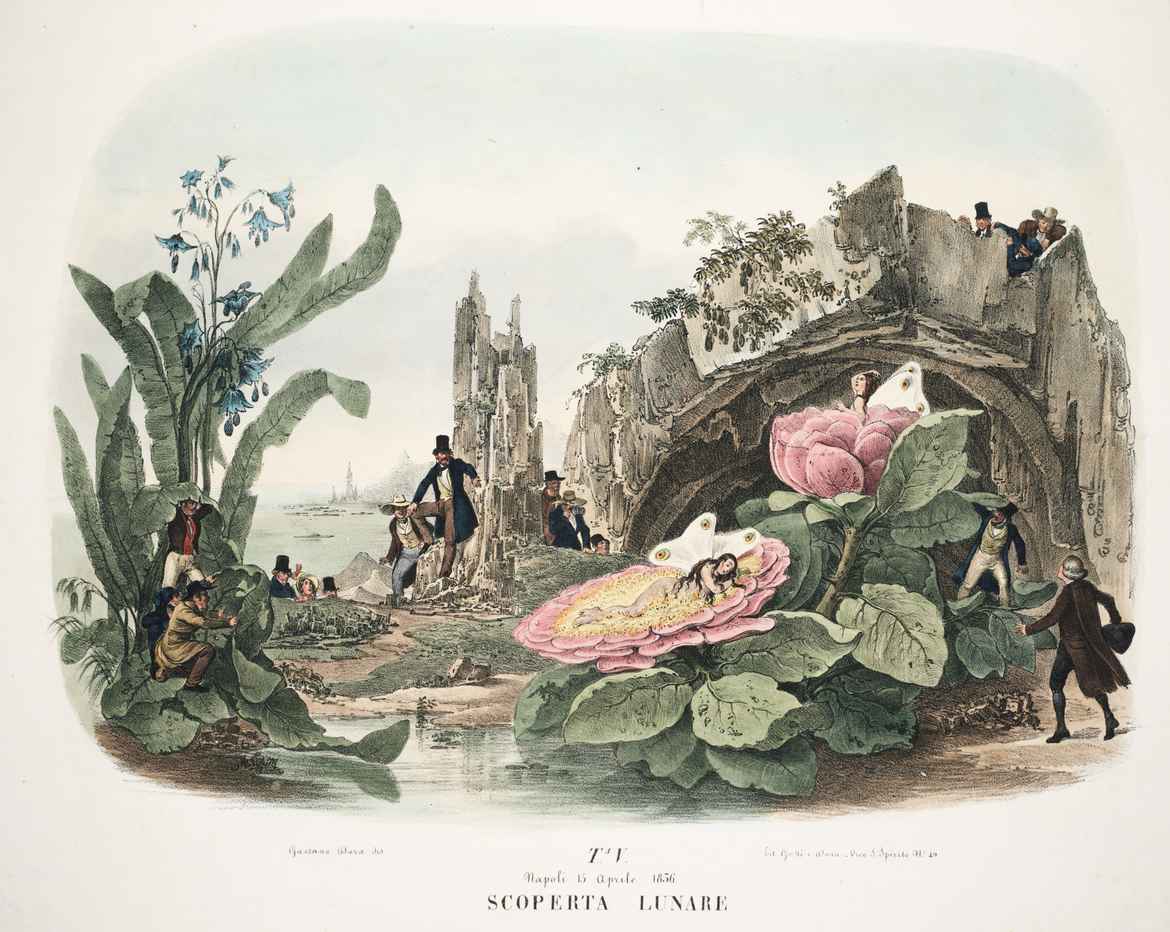