How to Drink in Moderation: The Pythagorean cup

Man, I wish had had one of these on me yesterday… I wouldn’t feel so crappy now… Anyway, meet the Pythagorean cup (also known as a Pythagoras cup, a Greedy Cup, a Tantalus cup), a drinking cup that forces its user to imbibe only in moderation. Credited to Pythagoras of Samos, it allows the user to fill the cup with wine or any other liquid up to a certain level. If they fill the cup only to that level, the imbiber may enjoy a drink in peace. But if they are greedy, the cup spills its entire contents out through the bottom (onto the lap of the immodest drinker). 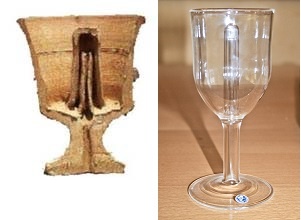 As explained on Wikipedia, “the Pythagorean cup looks like a normal drinking cup, except that it has a central column in it, positioned directly over the stem of the cup and over the hole at the bottom of the stem. A small open pipe runs from this hole almost to the top of the central column, where there is an open chamber. The chamber is connected by a second pipe to the bottom of the central column, where a hole in the column exposes the pipe to (the contents of) the bowl of the cup.

When the cup is filled, liquid rises through the second pipe up to the chamber at the top of the central column, following Pascal’s principle of communicating vessels. As long as the level of the liquid does not rise beyond the level of the chamber, the cup functions as normal. If the level rises further, however, the liquid spills through the chamber into the first pipe and out the bottom. Gravity then creates a siphon through the central column, causing the entire contents of the cup to be emptied through the hole at the bottom of the stem. Some modern toilets operate on the same principle: when the water level in the bowl rises high enough, a siphon is created, flushing the toilet.”