Look Around In The City of Anarchy 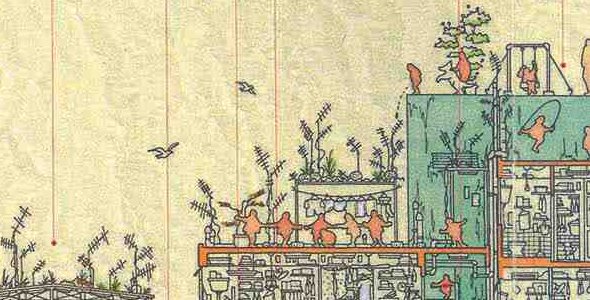 What is that guy up there peeing on? Kowloon, the City of Anarchy. We have already published a great infographic of the Walled City in Hong Kong that was once the most densely populated place on earth despite being constructed without a single architect or any oversight whatsoever. Now here is another fascinating (and extremely detailed) cross section illustration of this ungoverned hive of interlinking buildings, which became a haven for drugs, crime and prostitution until it was demolished in 1993. Read the story of the illustration below this high-res version (click to enlarge).

Although photo documentation of the site exists, for the most part much of the inner-workings of the city remained a mystery – but not forever. Perhaps due to its proximity, Japan, in particular, developed a keen interest towards Kowloon.

When it was demolished in 1993 the Japanese public tuned in to national television where it was being broadcast. But what most spectators didn’t know was that, up until the night before demolition, a group of Japanese researchers, including architects, engineers and city planners, had entered the deserted city and had been documenting every nook and cranny up until the bulldozers arrived.

Their findings were compiled into a book that, among other things, featured the above cross-section depicting what life was like inside the city. You can read more about the book on Spoon & Tamago.