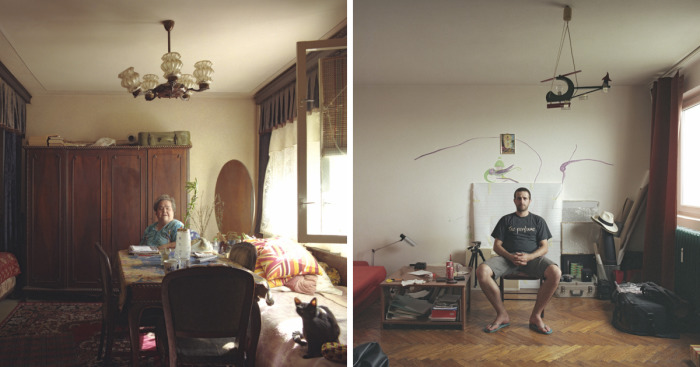 Bogdan Gîrbovan is a Romanian photographer whose cool project titled “10/1” captures people living above (below?) each other on the 10 levels of an apartment block. As he puts it:

“10/1″ is comprised of ten photographs, taken in ten single room flats in an apartment block located in the eastern area of Bucharest. It is a 10-storey apartment block, and the apartments are placed one on top of the other. They are identical, both in the detail of the exterior and interior. I have selected this building as I also live in it, on the 10th floor, and it is easier to approach the subjects. It is only one apartment block, erected in 1966, of the approximately 70,000 apartment blocks facing the same problem.”

“I took a photograph of each apartment (the interior of each space) from the same angle, in order to better illustrate the mix of social classes in the block, displaying only differences in the character and design of the interior. The rooms may be regarded as a psychological chart of those who live in them, reflecting their history and relation to present times.”